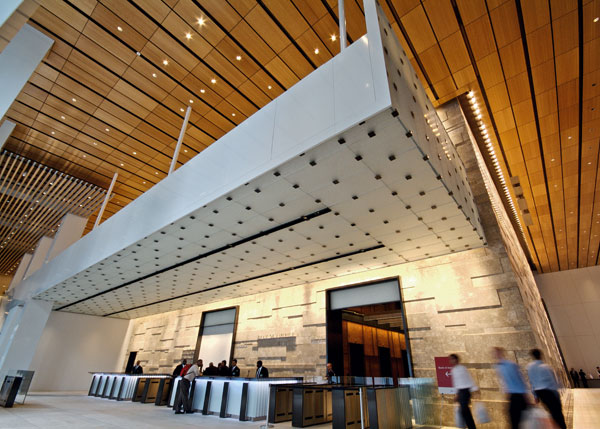 Iconic architecture and bold technologies were the brainchild of global building firm DURST Organization and its architects, COOK+FOX, when creating the BANK OF AMERICA TOWER at ONE BRYANT PARK.

And at Sans Soucie, with our reputation of creating high-end custom works in glass for luxury estates and a variety of commercial projects, the opportunity to answer when New York came calling was a welcome challenge.

Our largest project to date, David Schuldiner, Inc., commissioned us to create glass in three locations: suspended over the main desk, as an accent in the elevator lobby, and as the ceiling in the secondary lobby. The design was applied to Starphire® clear glass, with one surface sandcarved approximately 1/16” deep with a detailed, complex texture, simulating a “tree bark effect.” The background area of the glass was acid etched. In total, there are 359 pieces of glass, adding up to 4065 square feet of carved glass.

We are proud to state that in a global market where custom works of glass fall in the hands of few, we at Sans Soucie are honored to have been part of a project as monumental as the Bank of America Tower. 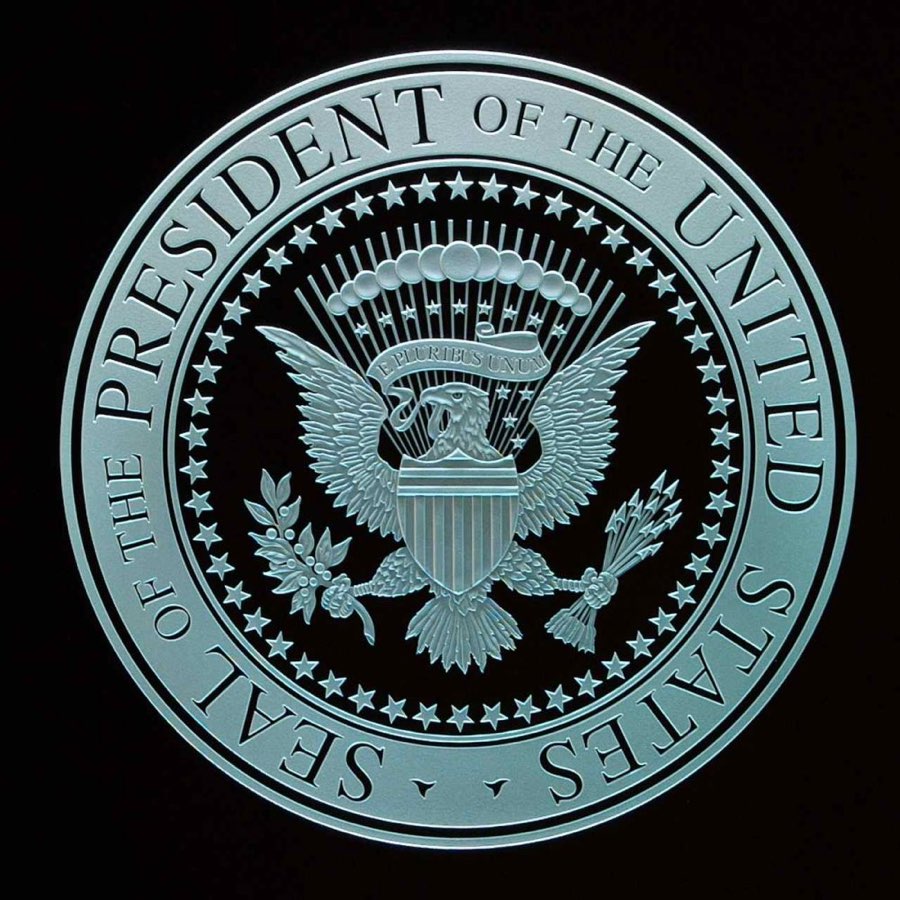 At Sans Soucie Art Glass Studios, Inc, we were selected to create a carved glass representation of the presidential seal for the new aircraft carrier, The USS George H.W. Bush (CVN 77). The seal is hand-carved in three dimensions on a 1/2” thick 28” wide x 46” tall piece of Starphire® clear glass. This impressive design is finished with the signature of 41st president, George H.W. Bush just beneath it and illuminated by LED edge lighting to give it an authoritative presence. The piece is now on display in the entrance of the Tribute Room, where photographs and biographical information about George H.W. Bush are arrayed to honor the namesake of the ship.

Named after the nation’s 41st president, The USS George H.W. Bush (CVN 77) is the 10th and final Nimitz-class aircraft carrier. This revolutionary ship with its numerous improvements and modernizations will pave the way to a new class of carriers. We are honored to be a part of this significant piece of our nation’s Naval fleet.

To find out more about Sans Soucie and our many types of custom carved and etched glass, visit www.sanssoucie.com. 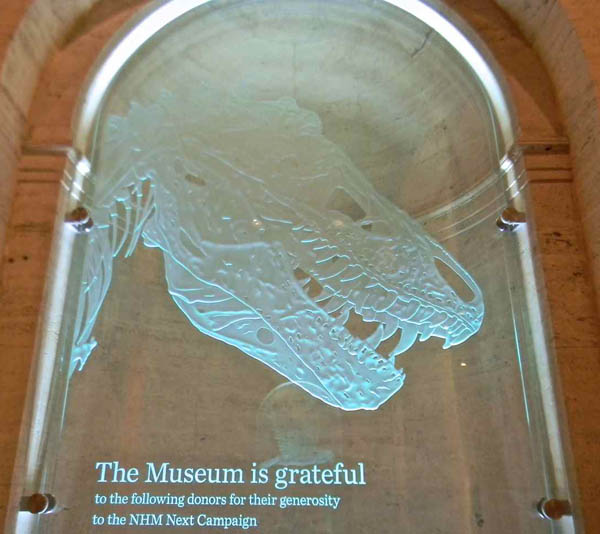 In May 2012 Sans Soucie Art Glass was commissioned by TFN Architectural Signage of Santa Ana to create glass donor plaques for display in the main entry of the museum.* The glass is sandblast deep carved with donor names, each one featuring a different design: a Tyrannosaurus Rex, Parrot, Nautilus and a Butterfly. The carved textures glow brilliantly thru the use of edge lighting at the bottom. Opened in 1913 the museum’s distinctive main building, with fitted marble walls and domed and colonnaded rotunda, is on the National Register of Historic Places. 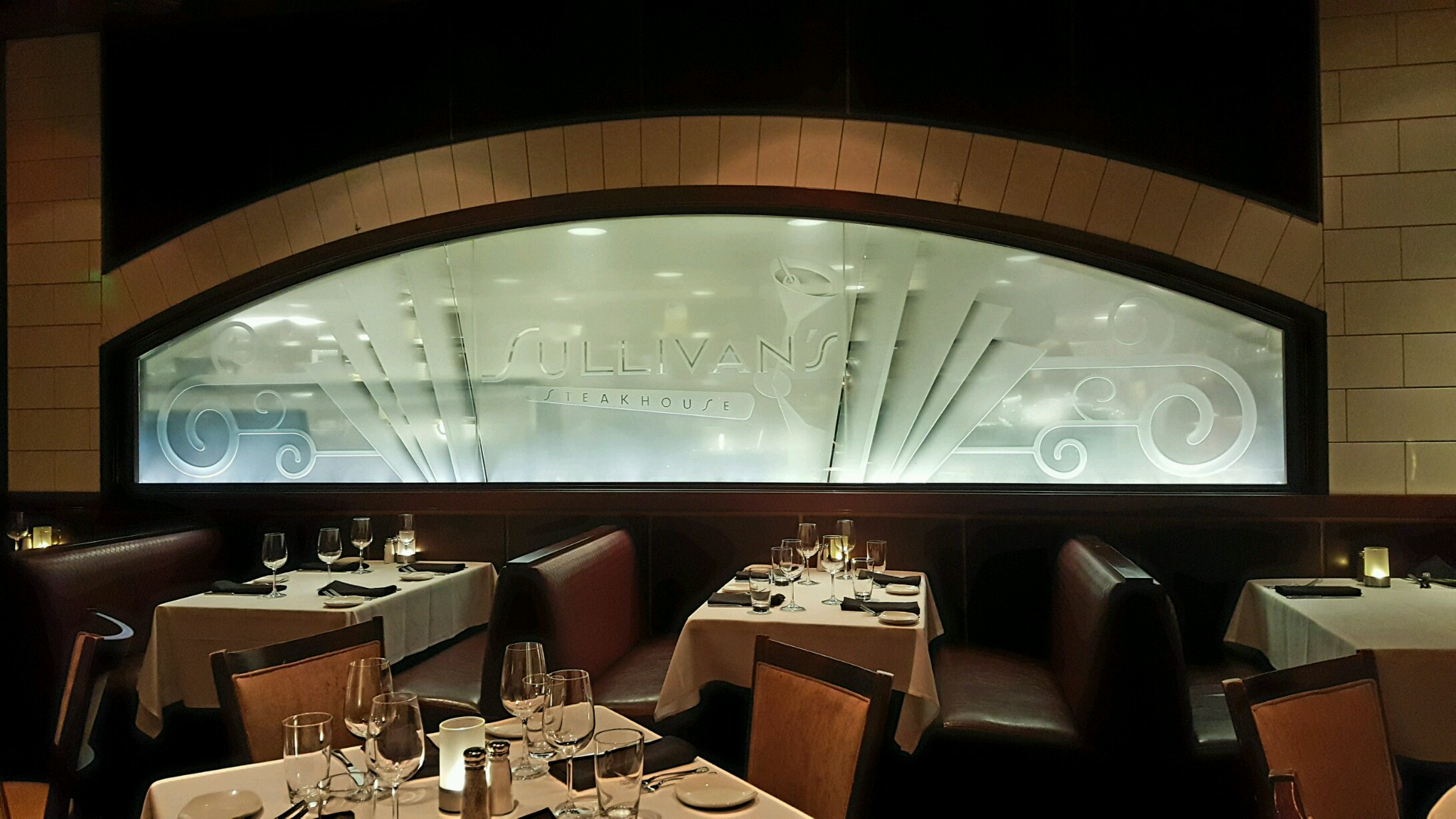 Featured inside the beautiful Sullivan’s Steakhouse in Seattle, Washington in 2010, this illuminated divider glass spans 18 feet wide x 49 in. tall.  The glass is 3D sculpture carved with a “sandblast misted” background for semi-privacy.  A focal piece in the room, the glass creates an obscured view from the dining room into the kitchen area.  A second set was created for corporate offices, in a different effect for 100% obscurity. 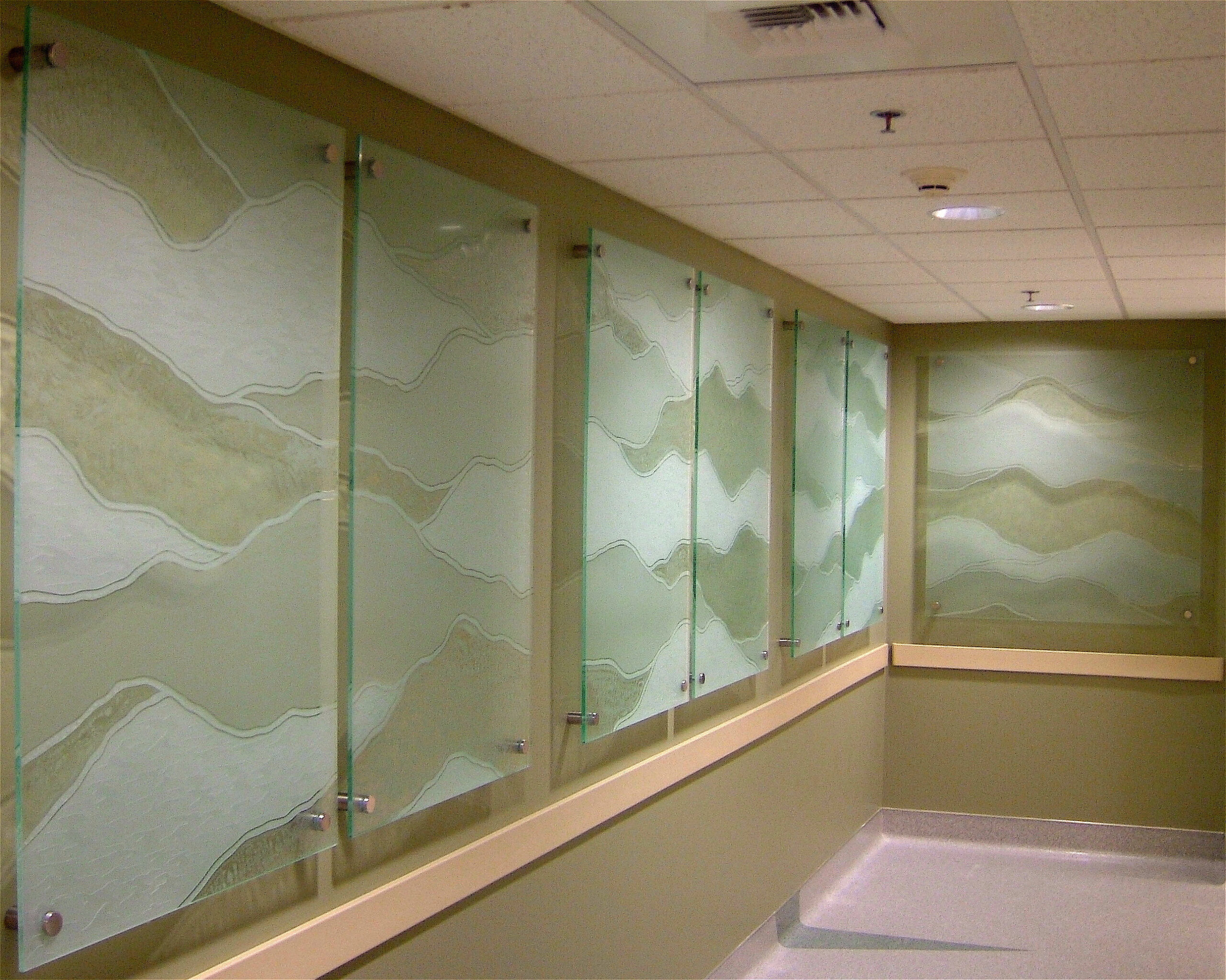 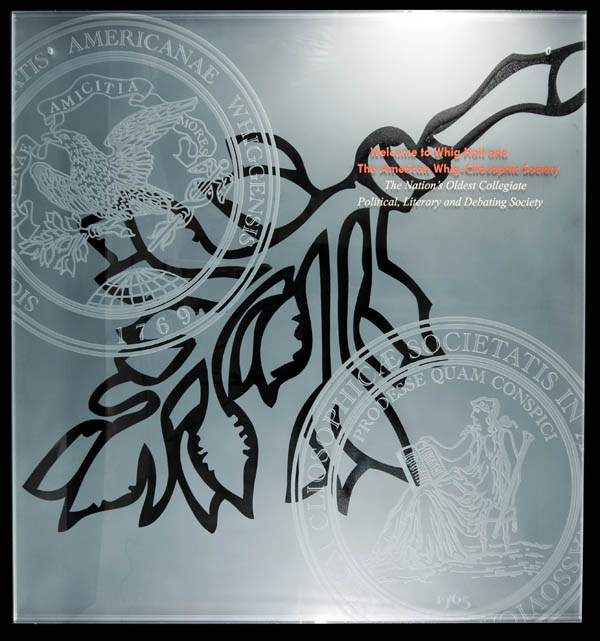 Whig Hall is the home of the nation’s oldest collegiate political and debating society — the American Whig-Cliosophic Society – and recently underwent a major overhaul to modernize the building, which had not been renovated in nearly 40 years. A classical Greek ionic structure built in 1893, Whig Hall along with Clio Hall, were designed by A. Page Brown as a pair of identical debate clubs. The Office of Design and Construction at Princeton University hired architecture firm Farewell Mills Gatsch of Princeton to oversee the renovation project.

The glass panel is approx. 96″ x 96″, 3/4″ thick Starphire® Clear Laminated Glass weighing approx. 600 lbs. The back surface is 3-dimensionally sculpture carved with two 52” diameter “Whig & Clio” seals that are off-set in opposing corners, and run off the edges of the glass. The overall surface is solid sandblast frosted, leaving, in clear glass, a large leaf branch image set diagonally across the entire surface. The leaf branch is a design element from the Whig seal, held in the eagle’s claw. The upper right hand corner of the front surface features sculpture carved and painted text that reads:

A ceremony marking the renovations was held November 14th, 2009. 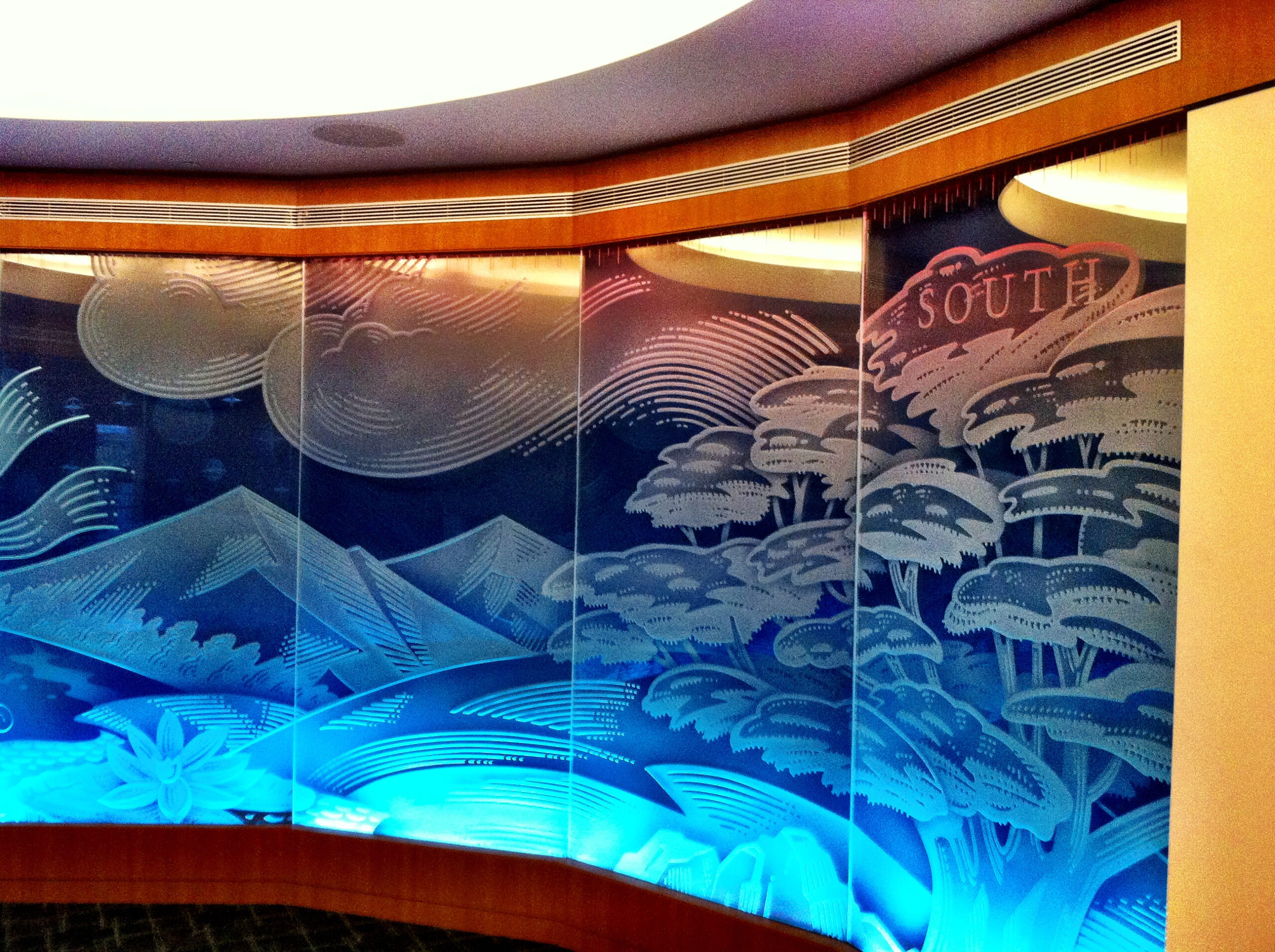 This glass mural wall surround is made up of 17 panels of 1/2″ glass, 3D carved and shaded in a unique, eclectic landscape design, created for the CHOC Children’s Hospital or Orange County, California in the spring of 2012.  The glass is edge lit, all across both the top and bottom edges, illuminating the carved art, for a stunning and dramatic effect. 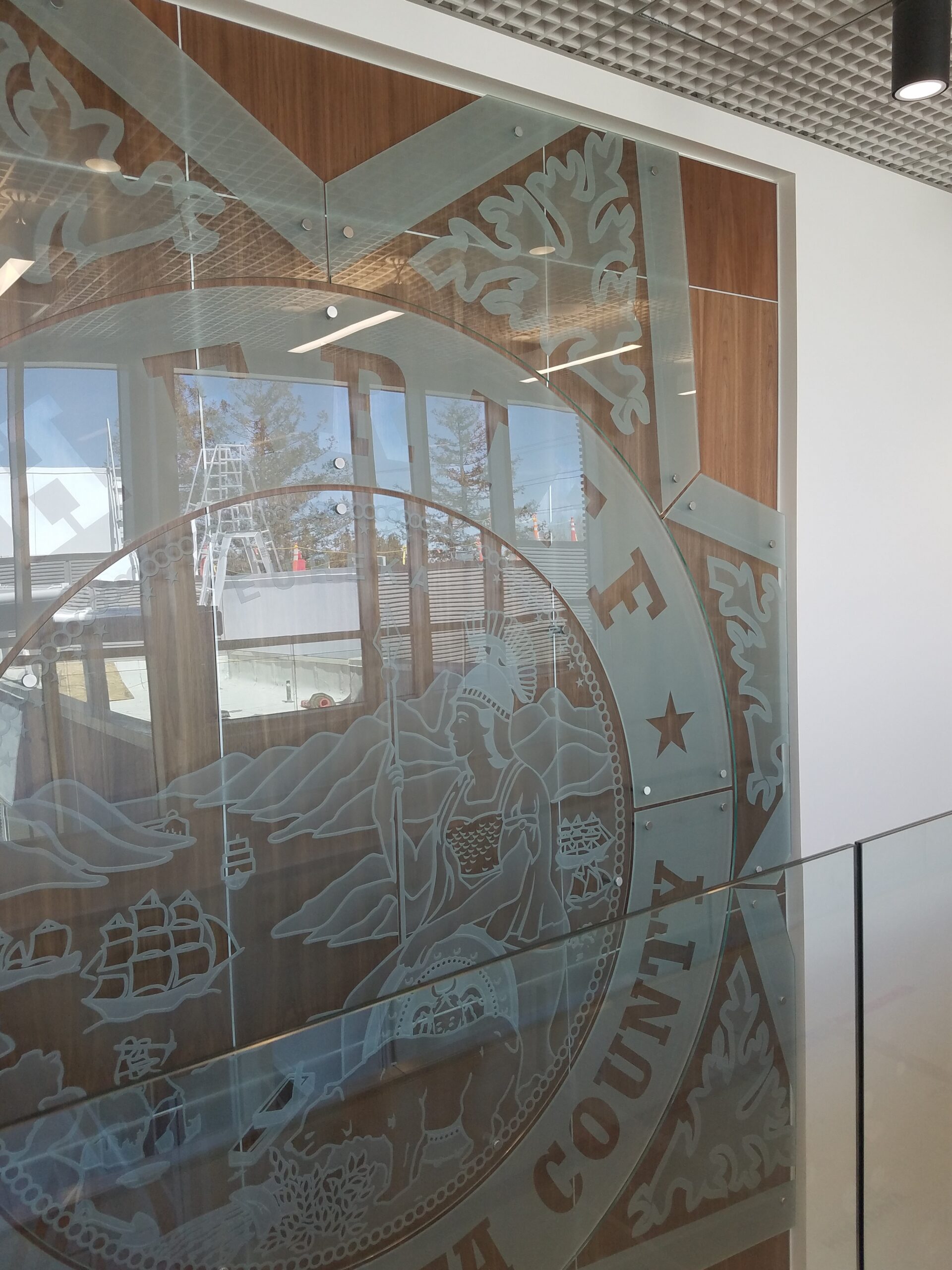 This beautiful 17.5 ft. diameter carved glass Sheriff’s badge was created for the Contra Costa County Office of the Sheriff in the fall of 2019.  Installed with stand-off posts on a medium wood tone wall brings out the light white etching and carving in the glass.  This stately sign is made up of one 90 in. diameter piece in the center, which is then surrounded by two half circle pieces, and 7 triangular shape pieces, 52″ tall. 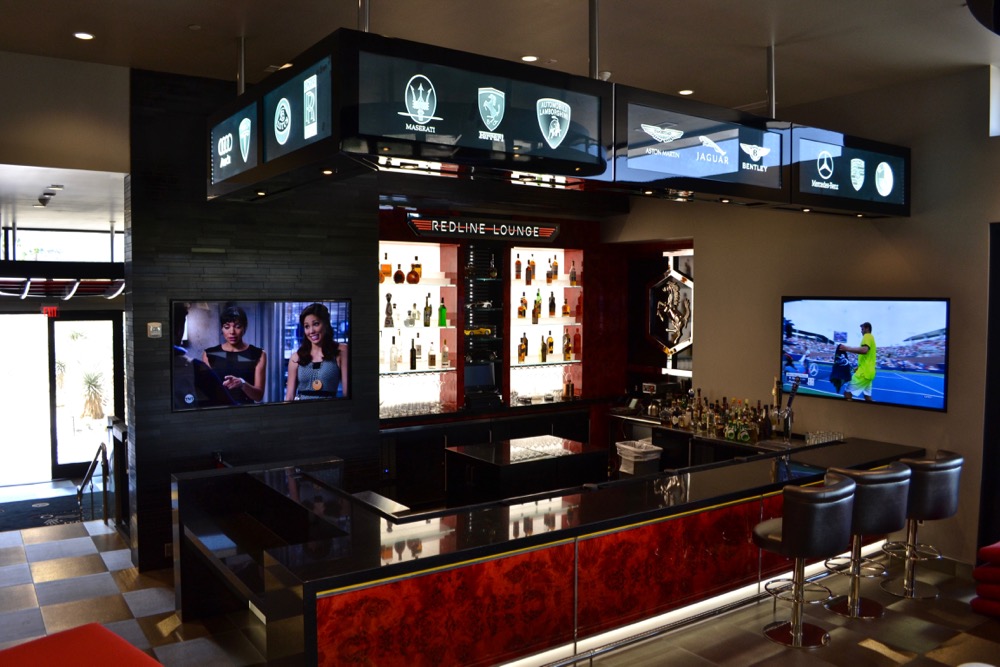 The Vault at Bighorn Golf Club

Commissioned by Spectrum Custom Design in 2015, Sans Soucie had the distinct privilege of creating a number of sets of stunning etched and deep carved exotic car logos for installation inside The Vault at Bighorn Country Club in Palm Desert, California.  These stunning logos are also edge lit, brightly illuminating all the details of the sculpture carving.   Included in the project was overhead glass above the bar area, glass handrail panels encircling a seating area, as well as glass cabinet door handles. 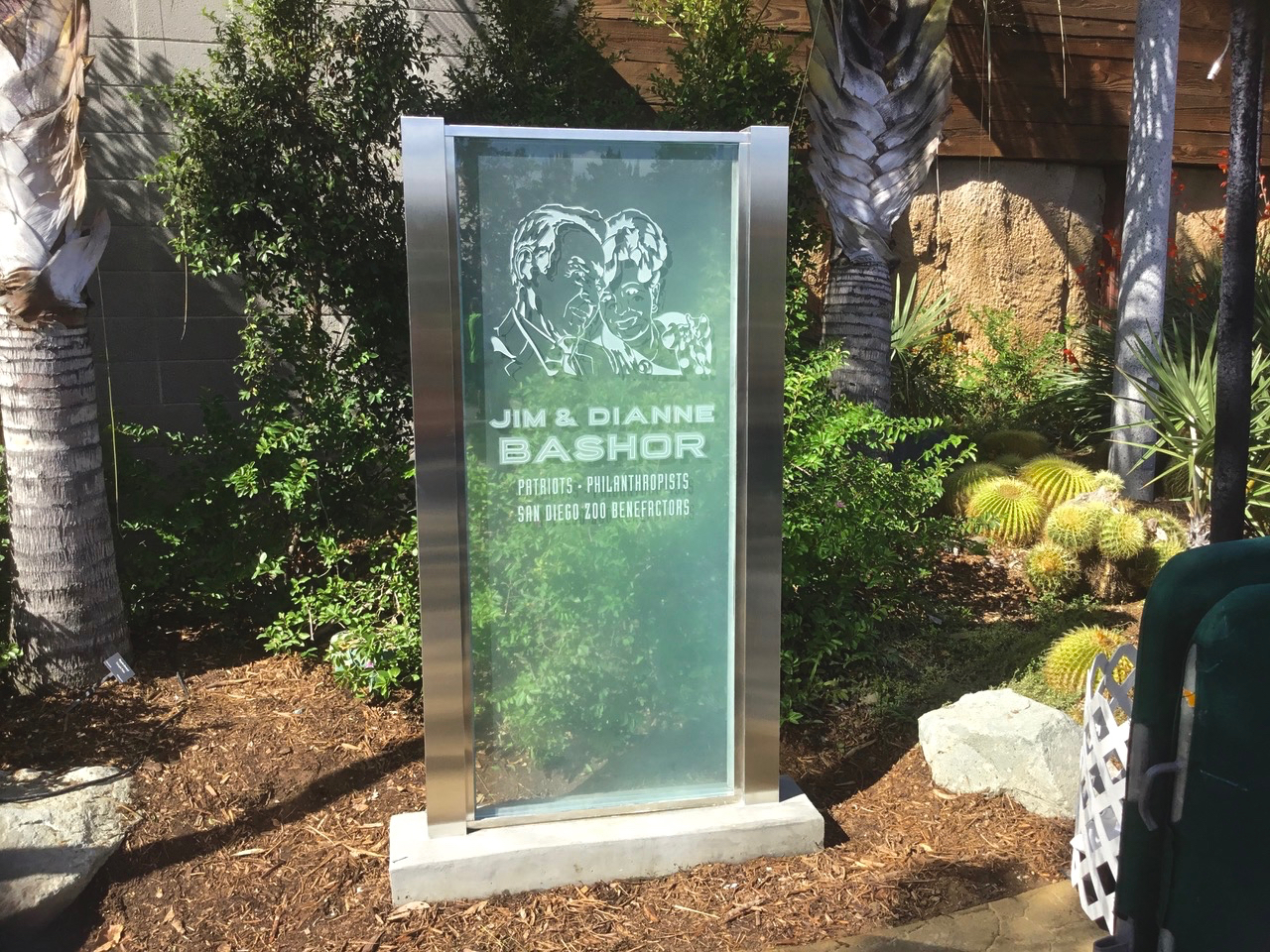 This glass sign created in 2017, is in honor of San Diego Zoo donors Jim and Dianne Bashor, who have also been clients of Sans Soucie Art Glass since 2009.  The glass is 3D solid carved with what we call a “misted background”, and features a portrait of the couple. Standing 30″ wide x 72″ tall, it’s installed between two stainlesss steel posts.  It was added beside a pedestrian bridge at the San Diego Zoo, formally named the “Jim and Dianne Bashor Bridge” on Nov. 11, 2017.  It honors the La Jolla couple’s donation to Zoo Global to benefit active duty military.  For more information, read the San Diego Tribune article here. 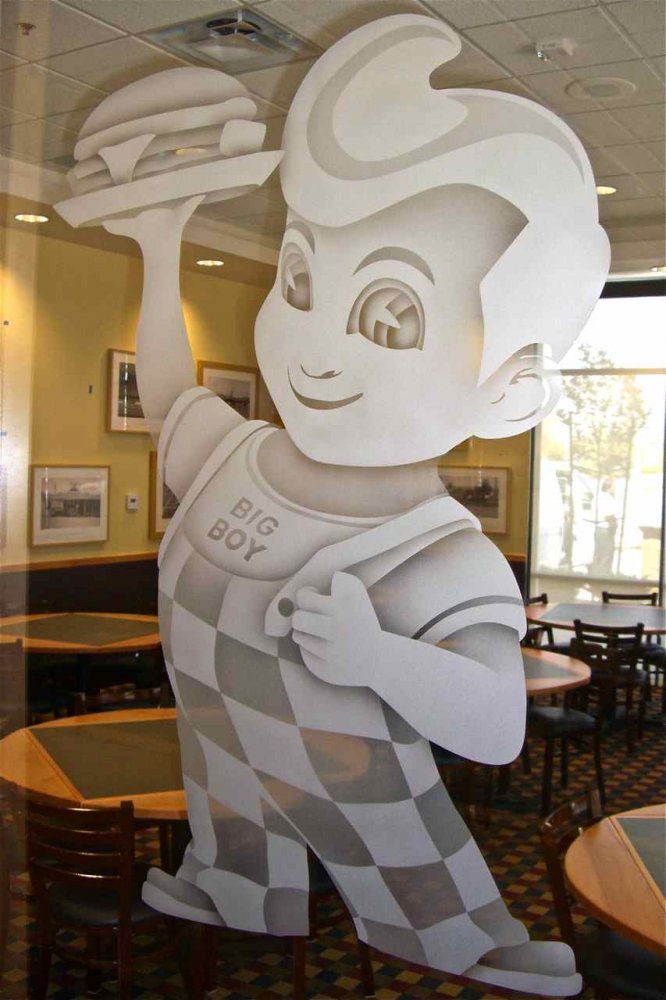 Featured at both the main campus in Loma Linda, California as well as a satellite office in Palm Desert, California, Sans Soucie was commissioned to create two sculpture style pieces of glass, 78″ x 36″ tall.  The glass is 3D carved and shaded, and features chiseled irregular edges, the design depicting the parable of the Good Samaritan as told by Jesus in the gospel of Luke in the scriptures.  The story of the Good Samaritan is about a traveler who is stripped of clothing, beaten, and left half dead alongside the road.  Finally a Samaritan happens upon the traveler.  Although Samaritans and Jews despised each other, the Samaritan helps the injured man.  An act of mercy and compassion.

Our Lady of Lourdes

Created in 2012 for a parish in Miami, Florida, this glass is 48″ x 63″ and depicts Our Lady of Lourdes, a Roman Catholic title of the Blessed Virgin Mary venerated in honour of the Marian apparitions that are claimed to have occurred in 1858 in the vicinity of Lourdes in France. 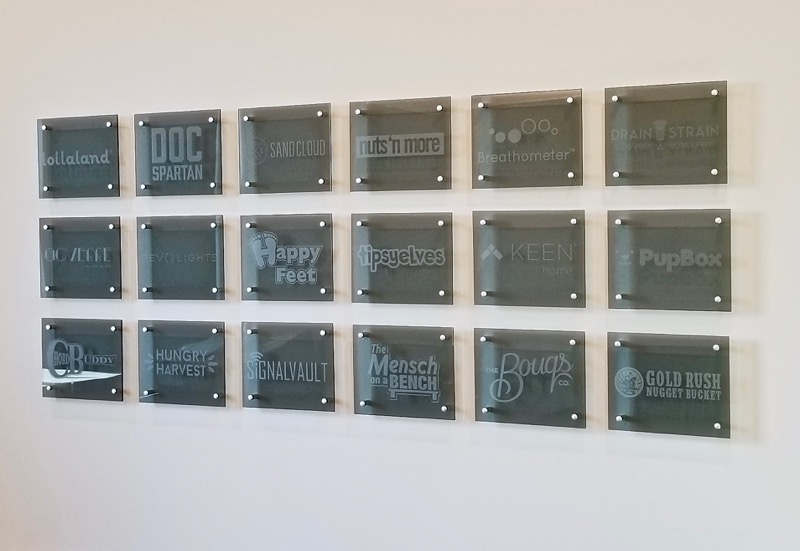 These glass signs were created for the Herjavec Group in 2017, each one featuring the logo of various company owned businesses.  Each sign is 10 x 18 x 1/4″ thick grey tempered glass.  The logos are sandblasted on the front surface of the glass in our 1D positive effect.  Etching on the grey glass creates enough contrast for the etching to be more visible when hung on a light color wall. 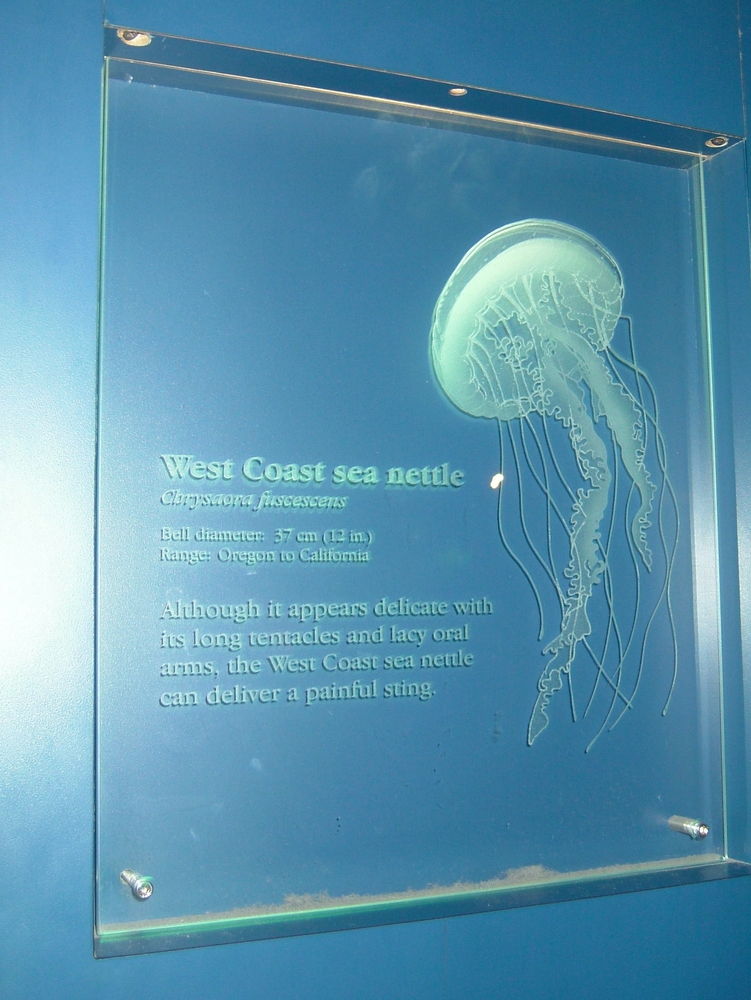 Long Beach Aquarium of the Pacific

These edge lit panels were installed at the Long Beach Aquarium of the Pacific in 2003.   Each one features an image and detailed information and descriptions of various types of jelly fish.  Each glass sign is 13″ x 16″ x 1/4″ thick glass and is surface etched in our 1D positive effect.  The glass is edge lit for a beautiful, dramatic effect that illuminates the white etching. 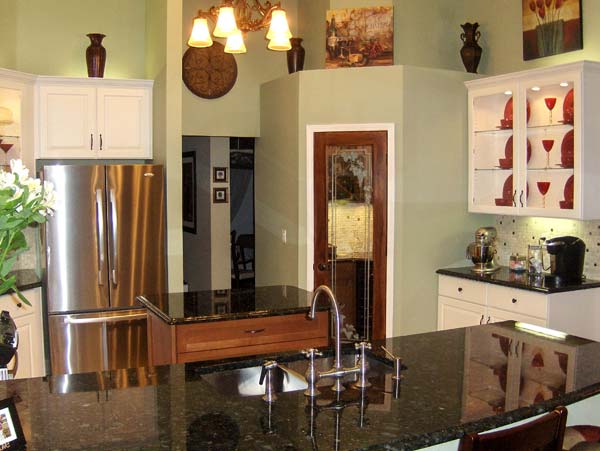 HGTV Battle On The Block

In January 2010, Sans Soucie Art Glass was contacted by HGTV Producer Jessica Cozzetta, who was looking for glass for a Wine Room Door, to be a part of a remodel in the kitchen of KEVIN & TRACEE HOLZENDORF of JACKSONVILLE, FLORIDA, who were a part of the HGTV’s BATTLE ON THE BLOCK, that premiered April 10, 2010.

‘Battle on the Block’ is a one-hour primetime series that premiered in April 2010. Hosted by HGTV’s Genevieve Gorder, it is a unique home makeover show where neighboring families compete against one another in an effort to redesign one room in their house within a designated budget – each family will be redecorating the same room. They will each have a team of on-camera experts present to help them carry out their designs. The best design makeover will be decided by a panel of judges, and the winning family receives a cash prize.

We communicated with the Holzendorf’s in March, prior to the show airing and asked them… “How do you like your Glass, and How’d you get on Battle n the Block?”